Hi Y’all!
I’m back again with some new releases for the month of February.
Don’t forget to check my Instagram accounts (@diversereads and @thetututeacher) to see new books featured all the time!

This post contains affiliate links for your shopping convenience. I earn a small (very small) commission each time someone makes a purchase through one of my links, which allows me to purchase more books to be able to share with you! Click on any of the pictures or titles to grab your copy. 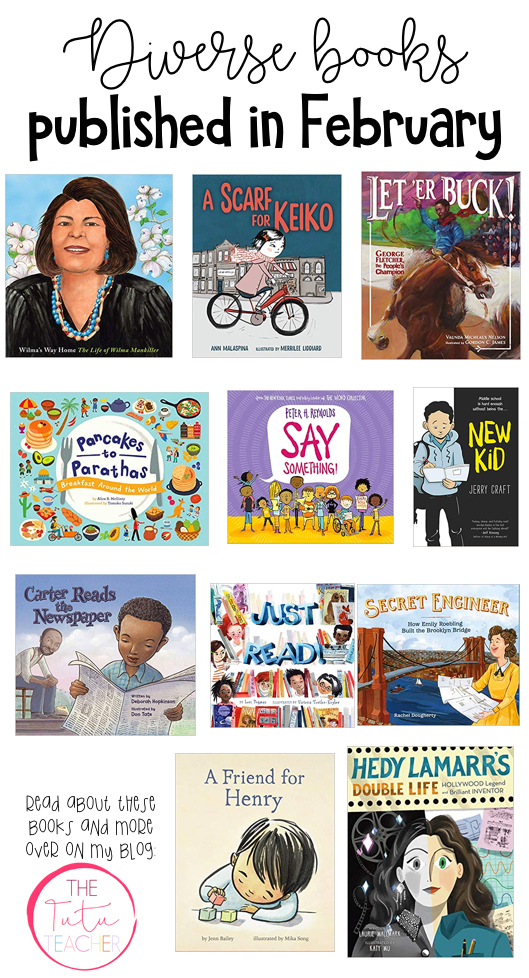 Wilma Mankiller was the first woman to be elected Principal Chief of the Cherokee Nation. She worked diligently to improve the lives and image of Native Americans. This book focuses on Wilma’s return to Oklahoma and the tribulations she had to overcome.  This book would be an amazing addition to every classroom (especially after recent events).  Wilma’s Way Home from Disney-Hyperion will be released on February 12.

A scarf for Keiko by: Ann Malaspina

This book looks heartbreaking and amazing all at the same time.. There are few children’s books which discuss on Japanese Internment camps.  In A scarf for Keiko, Keiko is a student in a class that is knitting scarves for soldiers.  It is 1942 and the Pearl Harbor bombing has just occurred. Other students in the class don’t like Keiko because she is a Japanese American.  Keiko finds a friend in Sam, another student in the class. But when Keiko’s family is moved to an internment camp, Sam and Keiko have to find a way to keep their friendship going.
A scarf for Keiko debuts February 1.

I really cannot wait for this book. Growing up in Texas, rodeos are a BIG deal. It’s exciting to see a story about a Black cowboy.  George Fletcher was declared “the People’s Champion” after being denied the first place due to a racist judge.  Gordon C. James is the illustrator of the book Crown, and his images are always so captivating. Let ‘er Buck will be available February 1.

Say Something by: Peter H. Reynolds

I was lucky enough to receive a copy of this book when I attended the NCTE conference last year. EVERY classroom library needs this book. It perfectly illustrates the way children can use their voice for change.  It doesn’t demand that everyone be loud or angry, but rather figure out how to be an ally and advocate in a way that makes sense for themselves.  The book is dedicated to Emma Gonzalez.
Say Something will be available February 26.

New Kid is a graphic novel about a Jordan Banks adjusting to life at the new private school his family has sent him to.  Trouble is, his new school is nothing like the neighborhood he is from.  Jordan is trying to make sense of what it means to live in two worlds.  He loves comics and uses his drawings to make sense of his daily interactions in middle school. I’m sure many students will connect with the style of this book, and I’m sure many more will connect with the story of being an “other”. I can’t wait to read this one, I love graphic novels and have been waiting to read another one!
New Kid debuts February 5.

Do you know the Father of Black History Month? Carter G. Woodson was the son of former slaves.  He taught himself how to read and always had an interest in history.  After years of learning history and traveling the world, Carter pioneered for “Negro History Week”, to take place in February. It wasn’t until many years later that it was changed to Black History Month. Carter Reads the Newspaper tells the story of a young boys thirsts for knowledge.  Carter Reads the Newspaper will be available on February 1.

One of my favorite things about being a teacher is seeing the love of reading grow in my students.  For little ones, who are learning the fundamentals of reading, it can be difficult for them to understand why reading is so important and how it can change their perspectives. Just Read celebrates the joy and magic of reading! Just Read debuts on February 5.

Did you know that the Brooklyn Bridge was built with the help of a woman?
Emily Roebling stepped in to help supervise the construction of the bridge after her husband fell ill. In a time when men were the only ones allowed to learn math, science, and construction, Emily’s intelligence helped ensure the success of one of the world’s most famous bridges. Secret
Engineer will be available February 19.

A Friend for Henry by Jenn Bailey

When I read this book at the NCTE conference, I teared up.  A Friend for Henry is the story of a young boy trying his very best to make friends. As the story moves along, it becomes very clear to the reader that Henry is having a difficult time making friends. Despite his efforts to remember the “rules” of friendship, he’s just not successful. Regardless, Henry is persistent in his pursuit of friendship.  This is a perfect story for the early childhood classroom. It reminds readers that the “rules” of friendship aren’t always applicable, that sometimes we have to change the “normal” way we think about friendship to be more inclusive.
A Friend for Henry debuts February 26.

I am always fascinated by the stories of famous people who lived a double life. Hedy Lamarr was an actress in the 1930s through the 1950s, and she was also an inventor.  The book Hedy Lamarr’s double life takes an in depth look at the public and more private work of Hedy Lamarr.  Her study in frequency hopping is still used today! Hedy Lamarr’s Double Life is available February 5.

I will feature other titles debuting in February on my Instagram pages!
Which one of these titles are you most excited to read?